Cecil was born on October 19, 1914 in Spokane, Washington USA as the son of Joseph (English) and Theresa (American) Potts, of Victoria, British Columbia. His parents were married on February 4 1913 in Vancouver. His brother was Joseph Henrick Potts and his sisters were Mrs. Evangeline Victoria Potts and Mrs. W. Edgington.
He was educated at the St. Louis College, Victoria. Before enlisting he was employed by the Manning Lumber Company.
He was a truck driver and he was member of the Roman Catholic Church.
He enlisted on June 24 1940 in Victoria and he went overseas to the UK on September 2 1941 and he went thereafter on June 6 1944 to France for the D-Day landing.
Cecil died of wounds of an accident with a mine on Saturday July 1 age 29 near Rots-Le Hamel and he was temporarily buried in Le Hamel and he was reburied on February 5 1945 in Beny S/Mer.
At his headstone: IN LIFE AND IN DEATH THOU ART MINE. REST IN PEACE
And his medals were: 1939-45 Star; France Germany Star; Defence Medal; War Medal; CVSM & Clasp. 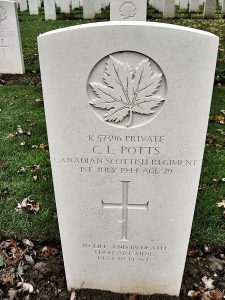