Bert was born on October 28 1921 in Rochfort Bridge Alberta as the son of Silius Kresten Martinas (Danish) and Catherine Sarah Jensen (English), of Rochfort Bridge. His parents were married on September 26 1916 in England. His brother was Mark Silius Johan (RCAF) and his sister Mary Jensen.
His profession was a farmer and he was member of the Lutheran Church.
He enlisted on June 28 1941 in Edmonton and he went overseas to the UK on March 29 1942 and he went thereafter to France for the D-Day landing on June 6 1944.
Bert was killed in action on Wednesday June 14 age 22 in the A Coy near Putot en Bessin and he was temporarily buried there and on January 18 1945 reburied in Bretteville S/Laize.
At his headstone: WE ARE PROUD OF YOU, SON. MOTHER AND DAD
His medals were: 1939-45 Star; France Germany Star; War Medal; CVSM & Clasp. 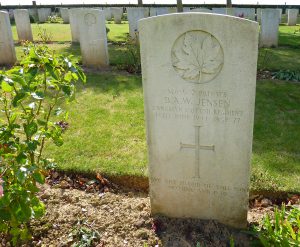