August was born on June 20, 1914 in Lipton, Saskatchewan as the son of August John (Swedish and deceased in 1926) and Eva Eckman (English and deceased in 1940). His parents were married on August 24 1904 in Manitoba. He was married on October 27 1939 in Powell River British Columbia with Ann Eckman, of Wildwood Heights, British Columbia. Their daughters were Eleanor Ann and Joan Elaine Eckman. His sisters were Alice Adelaide Pugh, Elizabeth Lavina Sel, Lillian Florence Sandburgh, Edith Beatrice Bram and Greta Rachel Criddle.
His profession was a setter at a saw mill and he was member of the Presbyterian Church.
He enlisted on March 23, 1943 in Vancouver and he went overseas to the UK on September 1 1943 and he went thereafter to France on Tuesday June 6 1944 where he was in the first assault wave during the D-Day landing.
August was killed in action on this same day age 29 in the C Coy and he was temporarily buried in St Croix Graye S/Mer and he was reburied on February 16 1945 in Beny S/Mer.
At his headstone: IN MEMORY’S GARDEN WE MEET EVERY DAY
And his medals were:1939-45 Star; France Germany Star; Defence Medal; War Medal; CVSM & Clasp. 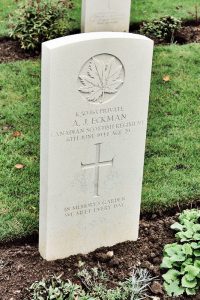