Arthur was born on September 3 1919 in Medicine Hat Alberta as the son of Mr. Arnsdorf (deceased and German) and Ida Arnsdorf of Lethbridge Alberta. His parents were married on October 16 1912 in Chaplin Saskatchewan. He was married on July 12 1942 in Lethbridge with Katherine Arnsdorf, of Vancouver. She remarried as Mrs. Burchak after the war. His brothers were William, Hans (both in the army too) and Walter Arnsdorf and his both sisters were Gertrude and Esther Arnsdorf.
His profession was a drug clerk and he was member of the Lutheran Church. He spoke English and German. His hobbies were skating, hockey, baseball, rugby and swimming.
He enlisted on April 26 1943 in Calgary and he went overseas to the UK on March 14 1944 and he went thereafter as reinforcement to France on June 9 1944.
Arthur was killed in action on Saturday July 8 age 24 and temporarily buried in Cussy and he was reburied on February 8 1945 in Beny S/Mer.
At his headstone: RETURN UNTO THY REST O MY SOUL FOR THE LORD HATH DEALT BOUNTIFULLY WITH THEE
And his medals were: 1939-45 Star; France Germany Star; War Medal; CVSM & Clasp.enge 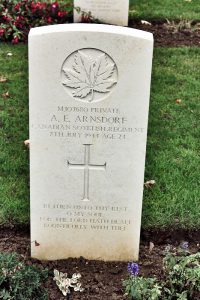