Arthur was born on January 13 1921 in Victoria British Columbia as the son of H. J. Richardson (place unknown) and Marion Jane Richardson, of Victoria.
He was a seaman and member of the Presbyterian Church.
He enlisted on June 29 1940 in Victoria and he went overseas to the UK on September 2 1941.
Arthur  died of wounds on Thursday December 18 1941 age 20 due to a motorcycle accident  in England  and he was then buried at the Brookwood Military Cemetery.
At his headstone: IN GOD WE TRUST
His medals were: War Medal and CVSM & Clasp. 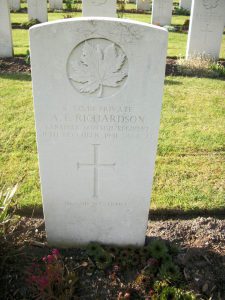