Arnold was born on April 27 1921 in Dundurn Saskatchewan as the son of James and Etta Mabel Martindale. He was married on December 2 1939 with Penuel Grant Martindale, of Vancouver. Their daughters were Joyce Geraldine Anne and Florence Janet Therese Martindale. Penuel remarried after the war as Mrs. Rosso.
He was a salesman and member of the United Church.
He enlisted on February 28 1944 in Vancouver and he went on August 11 1944 overseas to the UK and he went thereafter on November 4 to NW Europe.
Arnold was killed in action on Sunday February 18 1945 age 23 in the C Coy at the Moyland Wood during the battle of the Rhineland. And he was temporarily buried in Bedburg Hau Germany and he was then on September 13 1945 reburied in Groesbeek.
His medals were: 1939-45 Star; France Germany Star; War Medal; CVSM & Clasp. 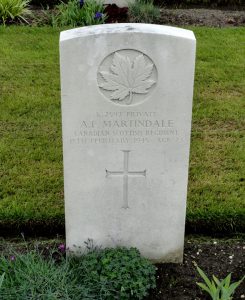