Alfred was born on January 17 1922 in Granger NY USA as the son of Alfred Henry and Frances Phoebe Kingsley, of Dalton, New York, U.S.A. They were married on April 24 1912 in Fillmore NY USA. His fiancé was Miss J.B. Moss of Kilburn London England.
His brother was Charles Kingsley and his sisters were Mrs. Ella May Evans, Mrs. Evelyn Godwin and Frances M., Grace M. and Caroline V. Kingsley.
He was a labourer and member of the Evangelical Church.
He enlisted on December 22 1941 in Hamilton Ontario and he went on March 23 1942 overseas to the UK and he went thereafter on September 7 1944 to France.
Alfred was killed in action on Wednesday March 28 age 23 in the D Coy near Emmerich Germany during the battle of the Rhineland. And he was temporarily buried in Vrasselt Germany and he was then on February 13 1946 reburied in Groesbeek.
At his headstone: GOD WILL REDEEM MY SOUL FROM THE POWER OF THE GRAVE: FOR HE SHALL RECEIVE ME”
His medals were: 1939-45 Star; France Germany Star; Defence Medal; War Medal; CVSM & Clasp. 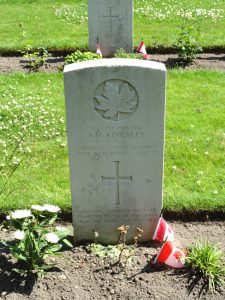