Alfred was born on February 20 1912 in North Salem Nova Scotia as the son of David and Daisy Ethel (deceased) MacPhee. His parents were married on July 29 1903 in North Salem. He was married on April 23 1932 in Turo Nova Scotia with Mary MacPhee nee MacDonald, of Truro. They had two sons Bernard David and Raymond Murray MacPhee and one daughter Ann Maria MacPhee. His brother was Frank Augustus MacPhee and his sisters were Grace Ida Jennings and Elizabeth Almeda Linfield-MacPhee.
He had a barbershop and he was member of the Roman Catholic Church.
He enlisted on May 11 1942 in Truro and he went overseas to the UK on October 8 1942 and he went thereafter on June 6 1944 to France for the D-Day landing.
Alfred died of wounds on Saturday July 8 age 32 near Cussy and he was temporarily buried in Beny S/Mer and he was reburied on April 16 1945 there.
At his headstone: REQUIESCAT IN PACE
And his medals were:1939-45 Star; France Germany Star; Defence Medal; War Medal; CVSM & Clasp. 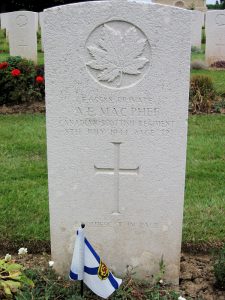