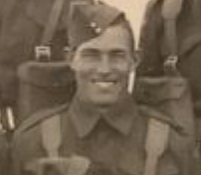 An athletic farmers son, killed between Wehl and Didam

Alexander James (Jim for short) Miller was an athletic type. When he had a physical in March1943 when he was 19 years old, Lieutenant W. M. Pecover, who performed the physical, noted that Miller’s fitness level was optimal in all categories. He was in prime health, excellent build, perfect length and weight. “This combination was”, according to Pecover “the most important trump card of this man as a soldier.”

But Pecover also noted a minus. “He has a modicum of muscle but a lack of mental prowess.” Miller had enough intellect to be trained as a soldier. Though his peak would be reached in executing “general manual routine tasks.”

Miller was the eldest of three children. He was born January 8 1924 in High River, Alberta. His parents (Alexander and Mary Miller) had a farm, where he as the eldest son worked his fair share. Eight years younger sister (Jean) and three years younger brother (Robert) also worked at the farm of their parents, a 320 acres large mixed agrarian business. Like most farms in Alberta: a large portion was reserved for the growing of grain, which partly were consumed by the cattle (raised for meat). The Millers farm was of average size in Alberta. The farm had a tractor, some horses and several sheep. Two of the horses were Jims. His father bought the farm after he had returned from the Great War (WW I) unscathed.

Nineteen-year-old Jim was eager to follow in this father’s footsteps on the farm. When he nevertheless enlisted in the Canadian army in 1943 he explained it thus: I expect to be drafted anyway.

In May 1943, a few months after his enlistment, his health seemed not as spectacular as established at his physical. Miller developed lung problems and contracted the measels. Reason for the attending army doctor to send him home for two weeks on sick leave

Jim returned in the ranks and got a clean bill of health. He completed the basic training and in November 1943 he heard he was to be shipped to Europe. Early December he arrived in het United Kingdom.

Jim Miller was placed with the Canadian Scottish Regiment, with which he arrived on July 22 1944 at the battlefield in France. The first months he survived unscathed. But in November 1944 his parent received a disturbing message. Their eldest was wounded, the telegram said. What and the severity of the wound(s) was left to their imagination (classified).

Jim was shot in his foot, but not during combat. It was an accident. Jim was billeted in Ghent (Belgium) together with others whom he did not know personally (yet). He was recently placed in another company within the regiment. Another soldier, from C-company, was cleaning his rifle, when he placed the magazine in the weapon, it went off. The bullit wounded Jims right foot. Luckily the wound wasn’t severe. Four weeks later he was healed and he could rejoin his regiment.

Nevertheless the second of April 1945 his number was up, when he with the Canadian Scottish Regiment advanced through the Achterhoek East Holland. 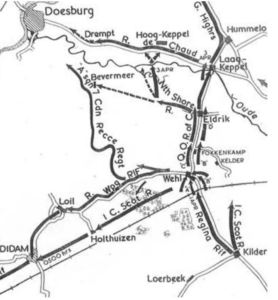 The C-company of the Canadian Scottish Regiment was in the lead when they around midday received order to go westward from Wehl to Didam. The war diary of the regiment notes that C-company encountered the first German resistance in the woods halfway to Didam. D-company was also engaged in the firefight. “After a short but severe battle in which the enemy claimed four lives”, according to the war diary, the CanScots captured 20 German prisoners of war. One of those four mentioned was probably Jim Miller. Two days later he was interred in the cemetery of Kilder. His parents received the most dreaded telegram on 9 April in which they were informed of the death of their son.

The farm of the Millers was continued by Jims brother Robert. Jims father died in 1971, his mother in 1988. Robert Miller and his wife Isobel Mae Hardonk raised six children on the farm. Until shortly before his death in November 2021 Robert tinkered with an old-timer John Deere tractor. Jim and Roberts sister Jean died in June 2006.

In 1946 Jim Millers remains were finally laid to rest on the Canadian War Cemetery in Groesbeek, Alexander James Miller is buried in plot 19, row C, grave 8. 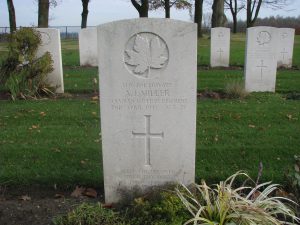