Albert was born on May 16 1920 in Montreal as the son of Michael (place unknown) and Katherine Dora Gunn, of Montreal. His sister Violet Gunn already died very young as a baby in 1919.
He was a factory hand and member of the Roman Catholic Church.
He enlisted on February 7 1941 in Montreal and he went on July 1 overseas to the UK and he went thereafter on September 6 1944 to France.
Albert was killed in action on Saturday October 7 1944 age 24 in the D Coy near the Leopold Canal in Belgium and he was temporarily buried near this canal and on May 28 1945 reburied in Adegem.
At his headstone: DEEP IN MY HEART YOU ARE LIVING YET I LOVED YOU TOO DEARLY TO EVER FORGET. MOTHER 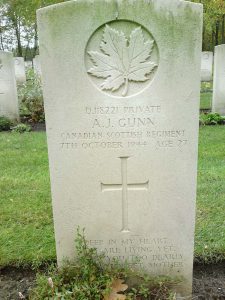