Adolph was born on August 28 1921 in Carseland Alberta as the son of Frank and Mary McCormack, of Carseland. His parents were married on May 20 1920 in Ronska Alberta.
His brother was George (army too) and U.M. McCormack.
His profession was a famer and he was member of the Roman Catholic Church.
He enlisted on November 6 1942 in Calgary and he went overseas to the UK on April 4 1943 and thereafter to France for the landing on the beaches of Normandy in the A Coy on Tuesday June 6 1944.
Adolph died of wounds on the same day age 22. He was temporarily buried in St Croix Graye S/Mer and on February 16 1945 reburied in Beny.
At his headstone: WHILE HE LIES IN PEACEFUL SLEEP HIS MEMORY WE WILL ALWAYS KEEP
His medals were: 1939-45 Star; France Germany Star; Defence Medal; War Medal; CVSM & Clasp. 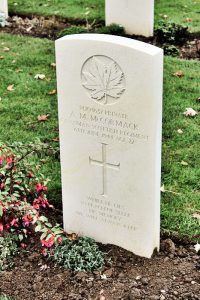