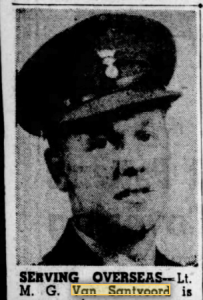 Martin (or ‘Van’ as he quickly became called by his colleagues), was born on  July 19 1916 in Appleton, Wisconsin, USA . He was the son of Anthonius F. and Theresa Van Santvoord. He was married with Patricia E. Van Santvoord of Vancouver and their son was Anthony Martin Van Santvoord.

Rhineland and a t Emmerich and gave valuable help in t h e l i b e r a t i o n of the village of Didam by virtue of his fluency in the Dutch language. This t a l e n t was again put to very good use in the fighting t o f r e e Deventer and elsewhere, as the unit moved into central and eastern Holland. Perhaps because he was so useful, and undoubtedly because there was a shortage of r i f l e platoon commanders, he was posted to ‘A’ Coy in mid-April 45. He gave on April 21-22 orders to the 18e peloton to liberate a part of the homeland of his ancestors.

At his headstone: BELOVED AND DEEPLY MOURNED BY HIS LOVING PARENTS AND ADORING WIFE AND SON 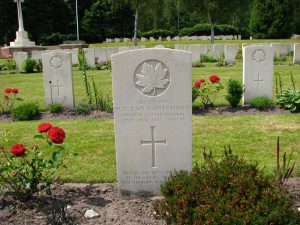