Malcolm was born on September 24 1916 in Virden Manitoba as the son of Mr Cunningham (deceased) and Jean Elizabeth Cunningham. She remarried as Mrs. Munday. He was the husband of Doris Mildren Cunningham, of Winnipeg and they had a daughter Joan Alice. Doris remarried after the war as Mrs. Saxon.
His profession was a bank clerk and he was member of the Church of England.
He enlisted on May 20 1942 in Portage la Prairie Manitoba and he went overseas to the UK on January 5 1944 and he went thereafter on June 12 to France.
Malcolm was killed in action on Thursday July 5 age 27 and he was temporarily buried in Beny S/Mer and he was reburied there on April 26 1945.
At his headstone: GALLANT, LOVABLE AND BRAVE DEAR TO FAMILY AND FRIENDS, HE DIED THAT THEY MIGHT LIVE. EVER PROUDLY REMEMBERED
And his medals were: 1939-45 Star; France Germany Star; War Medal; CVSM & Clasp.
He served with the Canadian Scottish Regiment and the Royal Winnipeg Rifles. 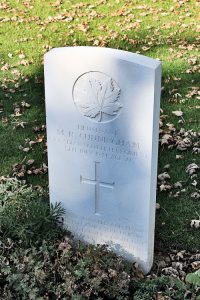