Frank was born on January 7 1913 in Bayfield Ontario as the son of Alonzo Franklin Werts and of Louisa Whittaker Werts nee Shaw (both already deceased). His parents were married on May 18 1906 in Regina Saskatchewan. He was married on April 18 1942 in Calgary with Madeleine Margaret Werts nee Putnam, of Erickson, British Columbia. His brother was Frederic Lex Werts.
He was a pharmacist and drug store manager and member of the Presbyterian Church.
He enlisted on December 6 1941 in Vancouver and he went overseas to the UK on July 30 1942 and he went thereafter on June 6 1944 to France during the D-Day landing.
Frank died of wounds on Tuesday June 27 age 31 near Rots-Le Hamel and he was temporarily buried in Ryes and he was reburied on February 28 1945 in Beny S/Mer.
And his medals were: 1939-45 Star; France Germany Star; Defence Medal; War Medal; CVSM & Clasp. 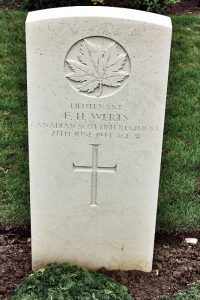