Francis was born on May 26, 1910 in Elbow, Saskatchewan as the son of Henry Francis and Laura Elizabeth Radcliff. He was married on September 25 1941 with Edith Doreen Elizabeth Radcliff, of Victoria, British Columbia.
He was a clerk and he was member of the Church of England.
He enlisted on July 9 1940 in Victoria and he went overseas to the UK on October 8 1941 and he went thereafter to France on Tuesday June 6 1944 in the first assault wave of the D-Day landing. His platoon of the C Coy was sent to attack Chateau Vaux, which was done with little difficulty. But he was yet mortally wounded leading his men further inland.
Francis was killed in action at the same day age 34 and he was temporarily buried in Graye S/Mer and on December 13 1944 reburied in Beny S/Mer.
At his headstone: GREATER LOVE HATH NO MAN THAN THIS ST. JOHN XV.13
His medals were: 1939-45 Star; France Germany Star; Defence Medal; War Medal; CVSM & Clasp. 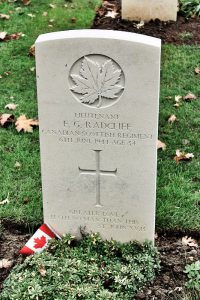