Edward was born on June 16 1917 in Strasbourg Saskatchewan as the son of Gustav August (German) and Mary Mathilda Schwandt nee Heck, of Strasbourg. They were married on February 23 1909 in Strasbourg. He was the brother of Henry Paul, Charles Fred, Walter John, Allan Earl and James Jacob Schwandt. His sisters were: Mrs. David Frasier, Mrs. Jacob Erhardt, Dorothy Jean and Emma Augusta Schwandt (deceased in 1916).
His profession was a high school teacher and he was member of the United Church.
His hobbies were baseball, softball, hockey and reading.
He has been for a short period in the RCAF too. He enlisted thereafter official into the army on July 21 1942 in Regina and he went overseas to the UK on May 7 1944 and he disembarked thereafter France on August 13 1944.
Edward was killed in action in the B Coy on Sunday August 27 1944 age 27 near Tourville and he was temporarily buried at the Tourville churchyard cemetery and he was reburied on October 4 1945 in Calais Leurbringhen.
Canada names natural features for its war dead, and so we have the Schwandt River in far northeastern Saskatchewan.
His medals were: 1939-45 Star; France Germany Star; War Medal; CVSM & Clasp. 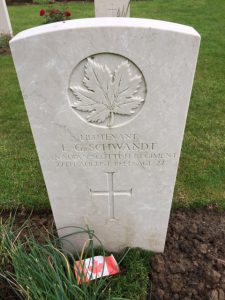