Donald was born on September 20 1916 in Montreal as the son of Mr. (first name unknown) and Kathleen Eyrl, of Vancouver. His stepfather was Victor Eugene Eyrl.
He was a student (agriculture) and member of the United Church. He spoke English and could write and read French.
He enlisted on November 6 1942 in Vancouver and he went on June 18 1943 overseas to the UK and he went thereafter on August 13 1944 to France.
Donald was killed in action on Friday February 9 1945 age 28 in the D Coy near the Waal flats during the battle of the Rhineland. And he was temporarily buried in Nijmegen and he was then on August 6 1945 reburied in Groesbeek.
At his headstone: NOUGHT CAN TAKE AWAY LOVE A HEART HOLDS DEAR, MEMORIES LINGER EVER AND KEEP HIM NEAR
His medals were: 1939-45 Star; France Germany Star; Defence Medal; War Medal; CVSM & Clasp. 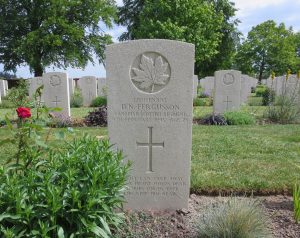