Lawrence was born on September 16 1916 in Toronto as the son of Lawrence and Mrs. Noone (deceased and both Irish) of Toronto. His parents were married in 1909 in Newbury New York USA. His brother was Harold Noone (also in the army) and his sisters were Mrs. Mary Armstrong, Mrs. Winnie Gilmartin and Mrs. Annie Castaldi. And a very close friend was R. Black.
He was a commercial traveller and member of the Roman Catholic Church. In his spare time he went to sports as a spectator and he read magazines.
He enlisted on November 17 1943 in Vancouver and he went on June 2 1944 overseas to the UK and he went thereafter on July 14 to France.
Lawrence was killed in action on Tuesday August 15 age 27 in the B Coy near Falaise and he was temporarily buried 2 km’s East of Soulangy and reburied on May 17 1945 in Bretteville S/Laize.
His medals were: 1939-45 Star; France Germany Star;War Medal; CVSM & Clasp. 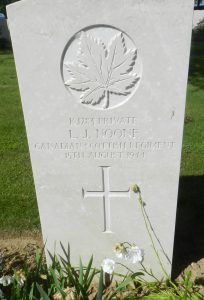