Clarence was born on June 2 1920 in Waugh Alberta as the son of Hector Nels Nadeau and Elisabeth Eva Nadeau nee Letourneau (both French) , of Dawson Creek, British Columbia. They were married on September 22 1914 in Legal Alberta. His brothers were Hector and Norman Nadeau and his sisters were Mae, Florence, Lorraine, Louise and Patricia Nadeau.
He was a farm labourer, truck and tractor operator and was member of the Roman Catholic Church. He also had experience as a butcher and wanted to become that too in the army. He enjoyed baseball and hockey and he did not read much.
He enlisted on March 25 1942 in Camrose Alberta and he went on June 13 overseas to the UK and he went thereafter on June 6 1944 to France for the D-Day landing.
Clarence was killed in action on Sunday February 18 1945 age 24 in the A Coy at the Moyland Wood during the battle of the Rhineland. And he was temporarily buried in Bedburg Hau Germany and he was then on September 19 1945 reburied in Groesbeek.
At his headstone: ETERNAL REST GIVE TO HIM, O LORD; AND LET PERPETUAL LIGHT SHINE UPON HIM
His medals were: 1939-45 Star; France Germany Star; Defence Medal; War Medal; CVSM & Clasp. 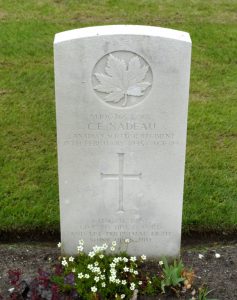