Thomas was born on March 10 1919 in Ashmont Alberta as the son of Robert H. and Flora Lyttle nee Lock (both English). His parents were married on March 17 1914 in Saddle Lake Alberta. He was married on September 7 1940 with Anie Lyttle in Vilna Alberta. Their sons were Wesley Thomas and Walter Robert Lyttle. His brothers were Clifford Robert, Cecil John, Albert, Edward James, Murray Ralph and Gordon Alfred Lyttle. His sisters were Gertrude, Anna Muriel, Sylvia Gladys and Lorraine Florence Lyttle.
He was a farmer and member of the Church of England.
He enlisted on February 4 1942 in Edmonton and he went on July 30 overseas to the UK and he went thereafter on June 6 1944 to France for the D-Day landing.
Thomas died of wounds on Tuesday August 15 age 25 in the D Coy near Falaise and he was temporarily buried 2 km’s East of Soulangy and reburied on May 17 1945 in Bretteville S/Laize.
His medals were: 1939-45 Star; France Germany Star; Defence Medal; War Medal; CVSM & Clasp. 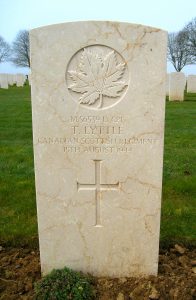