Stanley was born on January 25 1922 in Vancouver as the son of Alexander (deceased in 1943) and Elizabeth Ross, of Vancouver. His brother was Clarence Alexander Ross (in the army in Italy) and his half-brothers were James Rowand (also in the army in Italy), David (POW in Germany), Andrew Dempster (Woolich Arsenal England) and James Rowand (RAF England). And his half-sister was Vida Elizabeth Dempster (Mrs. W.G. Smith). His other brother Francis Davies Ross already died in 1924. There was an urgent request to the army of his very ill mother to let return him  from Europe to Canada but it was already unfortunately too late because of his death .
He was a messenger and member of the United Church.
He enlisted on July 12 1940 in Vancouver and he went overseas to the UK on June 12 1942 and he went thereafter to France on June 6 1944 for the D-Day landing. He was wounded in action on July 8 but was not evacuated to an English hospital overseas.
Stanley died finally of fatal wounds on Tuesday August 15 age 22 in the B Coy near Falaise and he was temporarily buried in Estrées La Campagne and reburied on May 14 1945 in Bretteville S/Laize.
At his headstone: HE DIED THAT WE MIGHT LIVE” HE LIVETH ON IN MEMORY SWEET
His medals were: 1939-45 Star; France Germany Star; Defence Medal; War Medal; CVSM & Clasp. 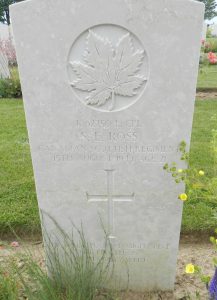