Peter was born in Toronto on January 26 1921 as the son of Henry and Elisabeth Ross, of Toronto. They were married in 1919 in Belfast Ireland.He was married on May 24 1941 with Bernice Evelyn Ross, of Toronto. Their children were Sharon Patricia and Robert Peter Ross and his brothers were Robert Henry (also in the army) and Harry Patrick Ross.
He was a truck driver and member of the Church of England. His hobbies were: sports like baseball and boxing, music (songs) playing guitar, and he likes tinkering with cars.
He enlisted on May 18 1942 in Toronto and disembarked the UK on May 1 1944 and disembarked on October 17 Belgium.
He was a member of the C Coy of his regiment in the Moyland Wood during the battle of the Rhineland.
Peter was missing in action on February 18 1945 and he died of wounds on Tuesday February 20 age 24 whilst POW and he was temporarily buried in Haldern ( Germany) and reburied on November 1 1945 in Groesbeek.
At his headstone: In the garden of memories We meet every day. 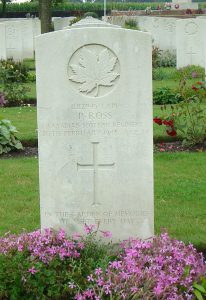