Morris was born on November 25 1920 in Andrew Alberta as the son of Edward (deceased) and Sarah Whitford, of Vilna, Alberta. His parents were married in 1906 in Pakan Alberta and both were half Indians. His sister was Amelia Whitford and his brothers were Donald and Arthur Whitford (also in the army overseas).
He was a labourer and member of the United Church.
He enlisted on July 2 1940 in Edmonton and he went overseas to the UK on September 2 1941 and he went thereafter on June 6 1944 to France for the D-Day landing.
Morris died of wounds on Friday June 9 age 23 in the D Coy near Putot en Bessin and he was temporarily buried there and on January 31 1945 reburied in Beny S/Mer.
At his headstone: GONE BUT NOT FORGOTTEN
His medals were: 1939-45 Star; France Germany Star; Defence Medal; War Medal; CVSM & Clasp. 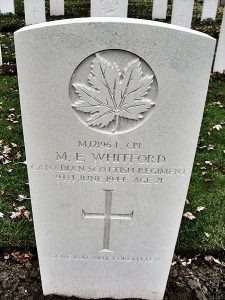