Michael was born on July 29 1925 in Austin Manitoba as the son of Colonel Malcolm Donald Robertson and Ethel Margaret Robertson (both English), of Victoria, British Columbia. They were married on October 6 1917 in Winnipeg. His brothers were Arthur Donald and John Nigel Robertson (both in the army too) and his sister was Margaret Patricia Robertson.
He was a grocery clerk and member of the Church of England.
He enlisted on August 13 1943 in Vancouver and he went on September 6 1944 overseas to the UK and he went thereafter on September 25 to France. He had already written before a long motivated letter to the army command to enlist and to become experienced in the army as his brothers and father.
Michael was killed in action on Monday February 19 1945 age 19 in the A Coy near the Moyland Wood during the battle of the Rhineland and he was temporarily buried in Bedburg Hau Germany and he was then on September 19 1945 reburied in Groesbeek.
At his headstone: FOR EVER WITH THE LORD
His medals were: 1939-45 Star; France Germany Star; Defence Medal; War Medal and CVSM & Clasp. 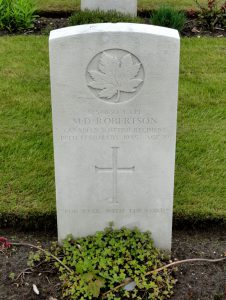