John was born on June 20 1922 in Winterburn Alberta as the son of George and Mary Gordon of Winterburn. They were married on March 3 1915 in Edmonton. His sisters were Mary and Williamina Gordon and Mrs. Florence Fraser. His uncle Mr. W.S. Walker send a request in March 1943 to the army if John could help hem because of his serious illness during a two months leave with the work at his farm (something John did more often). It is not know if this was granted.
He was a farmer and member of the Presbyterian Church.
He enlisted on December 9 1942 in Edmonton and he went on March 14 1944 overseas to the UK and he went thereafter as reinforcement on June 9 to France. He was missing in action then on October 28 and recovered back on November 1 from the Germans.
John was killed in action on Monday February 19 1945 age 22 in the A Coy near the Moyland Wood during the battle of the Rhineland and he was temporarily buried in Bedburg Hau Germany and he was then on September 19 1945 reburied in Groesbeek.
At his headstone: HE LIVES WITH US IN MEMORY AND WILL FOR EVERMORE
His medals were: 1939-45 Star; France Germany Star; War Medal and CVSM & Clasp. 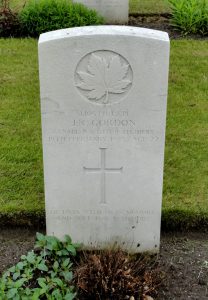