James was born on July 14, 1917 in Pincher Creek, Alberta as the son of James (English and deceased) and Ellen Wood (Swedish and deceased), of Wynndel British Columbia. His parents were married on December 24 1899 in Pincher Creek. His brothers were Eric James, Willis Joseph, Allan John, William Moline and Ronald Wood (also in the army). And his sisters were Florence Jane Wood (also his official excecutor), Mrs. Gladys La Barge, Mrs. Pat Downey and Mrs. Joseph Martell.
He was a farmer and member of the Presbyterian Church.
He enlisted on July 9 1940 in Creston, British Columbia and he went overseas to the UK on June 12 1942 and he went thereafter on June 6 1944 in the first assault wave to France during the D-Day landing.
James was killed in action on Saturday July 8 age 26 near Cussy and he was temporarily buried there and he was reburied on February 7 1945 in Beny S/Mer.
And his medals were: 1939-45 Star; France Germany Star; Defence Medal; War Medal; CVSM & Clasp. 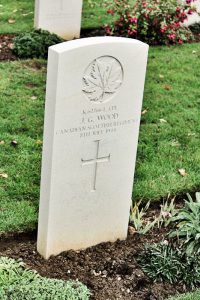