Henry was born on April 23 1920 in Regina Saskatchewan as the son of Mr. (deceased) and Gertrude Elam, of Regina.
He was a professional soldier and member of the Church of England.
He enlisted on September 1 1939 in Victoria British Columbia and he went on July 4 1944 overseas to the UK and he went thereafter on October 15 to France.
Henry was killed in action on Monday February 19 1945 age 24 in the C Coy at the Moyland Wood during the battle of the Rhineland. And he was temporarily buried in Bedburg Hau Germany and he was then on September 20 1945 reburied in Groesbeek.
At his headstone: KEPT BY AN ALL SUSTAINING POWER HE LOANED HIS LIFE TO GOD
His medals were: 1939-45 Star; France Germany Star; War Medal; CVSM & Clasp. 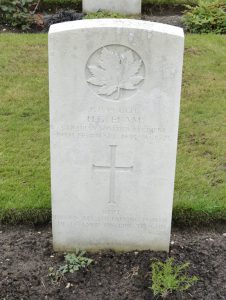