George was born on August 8 1917 in Glenboro Manitoba as the son of Ernest George and Florence Nellie Wotton, of Brandon, Manitoba. They were married on December 2 1914 in Glenboro. His brother was Ralph Wotton and his sisters were Nellie and Mable Wotton.
He was a locomotive watchman and member of the United Church. He enjoyed sports like football, skating and softball. He played the violin and other stringed instruments. He liked dancing, movies. radio listening and reading newspapers and magazines.
He enlisted on July 10 1942 in Winnipeg and he went on March 14 1944 overseas to the UK and he went thereafter on June 11 as reinforcement to France. He was wounded in action on July 8 and evacuated then to an English hospital and he disembarked on November 18 NW Europe again .
George was killed in action on Wednesday March 28 1945 age 27 in the C Coy near Emmerich Germany during the battle of the Rhineland. And he was temporarily buried in Vrasselt Germany and he was then on February 13 1946 reburied in Groesbeek.
At his headstone: THRO’ ENDLESS AGES EVER TO BE NEARER, MY SAVIOUR STILL NEARER TO THEE
His medals were: 1939-45 Star; France Germany Star; Defence Medal; War Medal; CVSM & Clasp. 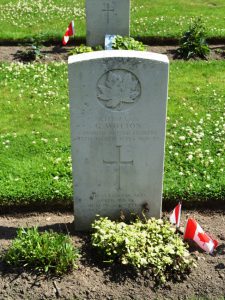