He was married on December 19 1929 with Helen Rosa McCall in Oyama British Columbia and they had two kids: a boy called Arthur Frederick (1930) and one girl Vivien Evelyn (1933).

He was a hard rock miner and member of the United Church of Canada.

He was appointed on February 16 1945 to Lance Corporal.

Frederick was killed in action on Monday February 19 1945 age 36 in the D Coy near the Moyland Wald in Germany during the operation Veritable and he was temporarily buried near the Heseler Feld at Calcar in Germany before being reburied in March 1948 in Holten.

He served with the Canadian Scottish Regiment. 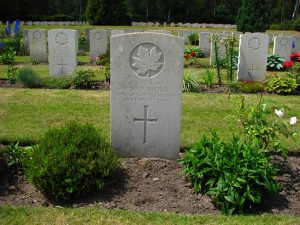