David was born on December 11 1913 in North Vancouver as the son of Earl Adam and Grace Brandner, of New Westminster, British Columbia. His parents were married on March 5 1913 in Vancouver His brothers were Ralph L. and W. Brandner and his sisters were Mrs. H.A. May and Marion Brandner.
His profession was a farmer and he was member of the Church of England. He did not have much time for hobbies or sports but liked reading good magazine stories.
He enlisted on December 16 1941 in Victoria British Columbia and he went overseas to the UK on June 24 1942 and he went thereafter to France on June 6 1944 for the D-Day landing.
David was killed in action on Saturday June 10 age 30 in the B Coy near Putot en Bessin and he was temporarily buried there and he was reburied on January 31 1945 in Beny S/Mer.
And his medals were: 1939-45 Star; France Germany Star;Defence Medal; War Medal; CVSM & Clasp. 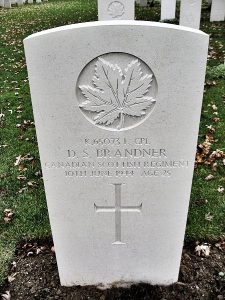