Carmen was born on June 15 1914  in Revelstoke, British Columbia as the son of Angelo  and  Mary Caponero (both Italians). He was married on July 1 1939 in Halden British Columbia with Amy Caponero and their sons were Donald John and Robert L.  Caponero. His brothers were Charlie, Ernest and Tony Caponero and his sister was Mrs. Bud Pearson.

He was a riveter at a shipyard in Vancouver and  member of the Roman Catholic Church.

He enlisted on April 19 1944  in Vancouver and he went overseas on October 12 to the UK and he went thereafter on November 11 to NW Europe where he was taken on strength to the Canadian Scottish Regiment. He was on November 21 in the area of Nijmegen.

He was involved with the “D” Coy in the operations in the Rhineland and was appointed to L /Cpl on March 24 1945, when his unit could cross the river Rhine.

Carmen was killed in action on Saturday April 21 1945 age 30 during the first attempt to liberate Wagenborgen. He was temporarily buried in Siddeburen and reburied on February 15 1946  in Holten.

At his headstone: AS WE LOVED YOU SO WE MISS YOU IN OUR MEMORY YOU ARE NEAR. LOVING WIFE AND SONS 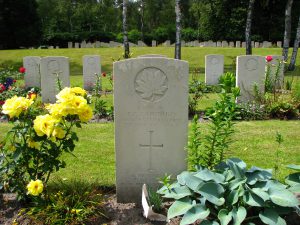