Byron was born on April 17 1905 in Greenfield Nova Scotia as the son of Enoch W. (deceased) and Annie Belle Freeman, of Imperoyal, Halifax Co., Nova Scotia. His brothers were Wilbert M. and Keith N. Freeman and his sisters: Mrs. Beryl Alexander and Mrs. Enid Flawn.
His profession was a labourer and he was member of the Baptist Church.
He enlisted on June 25 1940 in Calgary and he went overseas to the UK on September 2 1941 and he went thereafter to France for the D-Day landing on June 6 1944.
Byron died accidentally due to an explosion without guilt while laying a mine on Saturday July 1 1944 age 39 in the D Coy near Rots Hamel. And he was temporarily buried in Le Hamel and on July 27 1945 reburied in Bretteville S/Laize.
His medals were: 1939-45 Star; France Germany Star; Defence Medal; War Medal; CVSM & Clasp. 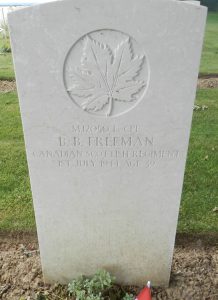