William was born on December 9, 1920 in Minnewaken, Manitoba as the son of Fred (French Canadian and deceased) and Manda McLeod nee Pascoe (Iceland). He was married on October 6 1941 in Minniwaken with Lucy Jane McLeod, of Lunday, Manitoba. His brothers were Frederick Edward, Lawrence, Pete, Clarence and Lloyd McLeod. His sisters were Mrs. Lawrence Mookman and Leonie McLeod and his half-sister was Lillian Pascoe. And his other sister Jennie McLeod deceased in 1930.
He was a farmer and member of the Roman Catholic Church.
He enlisted on April 10 1943 in Portage de la Prairie Manitoba and he went overseas to the UK on May 22 1943 and he went thereafter to France on June 6 1944 in the first assault wave for the D-Day landing.
William died of wounds on Tuesday August 15 age 23 in the C Coy near Falaise and he was temporarily buried 2 km’s East of Soulangy and reburied on May 17 1945 in Bretteville S/Laize.
At his headstone: THE DEPTHS OF SORROW WE CANNOT TELL FOR THE LOSS OF ONE WE LOVED SO DEAR. WIFE LUCY
His medals were: 1939-45 Star; France Germany Star; Defence Medal; War Medal; CVSM & Clasp. 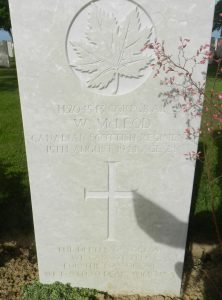