William was born on January 28 1906 in Kelty Fife Scotland as the son of John and Mary Allan nee Simper. They were married in Scotland. He was married on 16 November 1931 in Kelowna British Columbia with Kathleen Maud (Kay) Allan of Kelowna. Their daughter was Maureen Ellen and his brothers were Harry (Henry) and Gordon Allan and both were in the army too.
His profession was a truck driver and he was member of the United Church.
He enlisted on in July 17 1940 in Kelowna and he went overseas to the UK on September 2 1941 and he went thereafter to France on June 6 1944 for the D-Day landing.
William died of wounds on Sunday June 11 age 38 in the B Coy during the battle of Putot en Bessin and he was temporarily buried in Reviers and he was reburied on December 21 1944 in Beny S/Mer.
At his headstone: DEARLY LOVED AND EVER REMEMBERED BY HIS WIFE KAY, DAUGHTER MAUREEN AND BROTHER HARRY
And his medals were: 1939-45 Star; France Germany Star; War Medal; CVSM & Clasp. 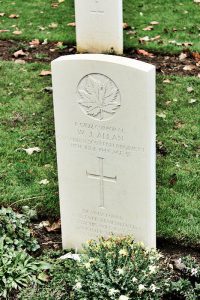