William was born on December 26 1921 in Kelowna British Columbia as the son of Rae George (also in the army) and Ruby Beryl Ritchie of Kelowna. His parents were married on January 10 1923 in Kelowna. His brothers were Gordon Kenneth, John Llewellyn and David Edward Ritchie and his sisters were Ellen Alzena and Margaret Jaeneen Ritchie.
He was a student and member of the United Church of Canada.
He enlisted on February 21 1941 in Vernon British Columbia and he went on September 2 1941 overseas to the UK and he went thereafter to France in the first assault wave during the D-Day landing.
William was killed in action on this Tuesday June 6 1944 age 23 in the C Coy and he was temporarily buried in Graye S/Mer and reburied on December 13 1945 in Beny S/Mer.
His medals were: 1939-45 Star; France Germany Star; Defence Medal; War Medal; CVSM & Clasp. 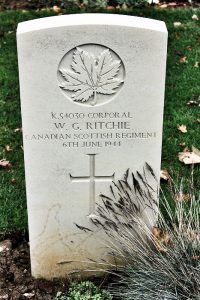