Peter was born on August 5 1918 in Nanaimo, British Columbia as the son of William and Katherine Bohoslowich, of Nanaimo. His parents were married in 1913 in Poland. His bother was John Bohoslowich and his sisters were Annie, Lucy. Mary and Alya Bohoslowich.
He was a coal miner and member of the Roman Catholic Church. He could understand the Polish language.
He enlisted on June 28 1940 in Victoria British Columbia and he went thereafter on September 2 1941 overseas to the UK.
Peter died on Saturday December 5 1942 age 24 due to an accident by a fall from a window while on leave in England and he was then buried at the Brookwood Military Cemetery.
At his headstone: THOUGH ON EARTH YOU ARE NO MORE YOUR MEMORIES ARE WITH US ALWAYS AS BEFORE
His medals were: Defence Medal; War Medal; CVSM & Clasp.
He served with the A Coy of the Canadian Scottish Regiment. 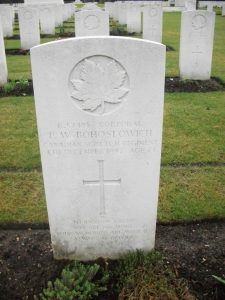