Nicolas was born on May 19 1913 in Swift Current Saskatchewan as the son of John (deceased) and Vaslina Budnick (both Romanian). His parents were married in 1912 in Swift Current. His mother remarried with Peter Pawluk. He was married on January 24 1942 with Jean Louise Budnick, of Kitchener, Ontario. His brother was Michael Budnick (also in the army) and his half-brothers were Samuel, William and George Pawluk. His sisters were Mrs. Mary (Harry) Shygera, Mrs. Anna (Herbert) Longstreet, Mrs. Rose (John) Wasyluk and his half-sister was Joyce Pawluk.
He was a machinist and member of the United Church. He spoke Ukrainian and English and he was interested in mechanics and his hobby was photography.
He enlisted on April 10 1944 in Vernon British Columbia and he went overseas to the UK on June 2 and he went thereafter as reinforcement on July 30 to France.
Nicholas was killed in action on Sunday August 27 age 31 in the B Coy near Touville/Elbeuf and he was temporarily buried at the church cemetery in Tourville and reburied on October 4 1945 in Calais Leurbringhen.
His medals were: 1939-45 Star; France Germany Star; War Medal; CVSM & Clasp. 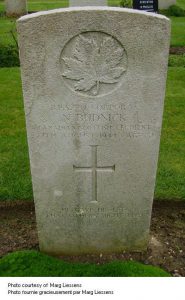