Michael was born on September 29 1923 in Leipseiz Saskatchewan as the son of Michael and Theresa Lesmeister, of Kelowna, British Columbia. His parents were married on November 8 1921 in Leipseiz. His brother was Walter George Lesmeister and his two sisters were Mrs. Margaretha Cifton and Doris Mary Lesmeister.
He was a mill worker and member of the Roman Catholic Church. He liked baseball, softball, swimming and reading general, most fiction.
He volunteered first in general service and enlisted on April 10 1944 official in Vernon British Columbia and he went on June 2 overseas to the UK and he went thereafter on July 30 to France.
Michael was killed in action on Tuesday August 15 age 20 in the A Coy near Falaise and he was temporarily buried at 2 km’s East of Soulangy and reburied on May 17 1945 in Bretteville S/Laize.
At his headstone: EVER REMEMBERED BY MOTHER AND DAD, SISTERS AND BROTHER
His medals were: 1939-45 Star; France Germany Star; War Medal; CVSM & Clasp. 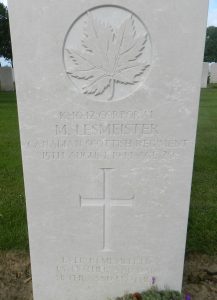