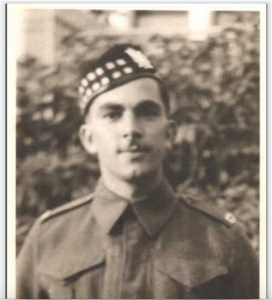 Lloyd was born on July 13 1916 Regina Saskatchewan as the son of Donald and Evelyn Violet Evans (deceased), of Vancouver. His parents were married in May 1907 in Richmond, Surrey England. His brother was Donald H.K. Evans and his half-brothers were Richard Francis and Phillip J. Evans. His sisters were Marjorie Violet Stratton, Mrs. Hazel J.W. Brown and Mrs. Mary Irene Bell and half-sisters Donna V. and Esther M. Evans.
He was a clerk and member of the Church of England.
He enlisted on July 17 1940 in Prince Rupert British Columbia and he went on March 29 1942 overseas to the UK and he was thereafter on June 6 1944  in the first assault wave of the D-Day landing in Normandy.
Lloyd was killed in action on Saturday October 7 1944 age 28 in the C Coy near the Leopold Canal in Belgium and he was temporarily buried in Maldegem and on July 16 1945 reburied in Adegem.
At his headstone: IN LOVING MEMORY OF OUR BELOVED SON AND BROTHER “FOREVER WITH THE LORD