Lloyd was born on December 19 1912 in Calgary as the son of John (Irish) and Nellie Butlin nee Bowers (English and deceased), of Calgary. His parents were married there on April 14 1909. His brothers were Joseph Charles and John Elmer Butlin and his sister was Josephine Agness Angeliggna Butlin. His half-brother was Harold Dewitt Bowers and half-sister Edith Lillian Bowers.
His profession was a labourer and he was member of the Church of England.
He enlisted on June 24 1940 in Calgary and he went overseas to the UK on September 2 1941 and he went thereafter on June 6 1944 to France for D-Day.
Lloyd was killed in action on Saturday July 8 age 31 in the C Coy near Cussy and he was temporarily buried there and he was reburied on February 7 1945 in Beny S/Mer.
At his headstone: THY TRIALS ENDED THY REST IS WON
And his medals were: 1939-45 Star; France Germany Star; War Medal; Defence Medal; CVSM & Clasp. 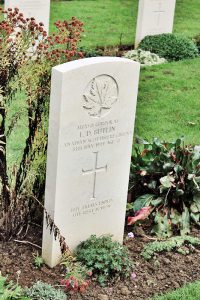