Leonard was born on May 7 1921 in Lang Saskatchewan as the son of William John and Florence Ida Bailey (English). His mother died just after the war on September 19 1945. He received permission of the army to marry about on  October 19 1944 with Margaret Whighton Earley of Glasgow Scotland. His brother was Reginald Thomas Bailey and his half-brother Alexander William Bailey. His sister was Mrs. Aimee Florence Hanny Prince and his other sister Muriel Eva Bailey already died in 1924.
He was a delivery boy and member of the Church of England.
He enlisted on September 12 1939 in Victoria British Columbia and he went overseas to the UK on May 7 1944 and he went thereafter on June 9 as reinforcement  to France.
Leonard was killed in action on Thursday September 28 age 23 in the C Coy near Calais and he was temporarily buried in Hardinghen and reburied on July 31 1945 in Calais Leurbringhen.
His medals were: 1939-45 Star; France Germany Star; Defence Medal; War Medal; CVSM & Clasp.
He was posthumously awarded on July 12 1948 with the Belgian Croix de Guerre avec Palme for the liberation of Belgium. 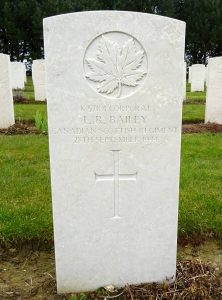