Laurence was born on March 15 1919 in Vancouver as the son of Charles and Angeline Wentz nee Boucher (both already deceased), of Chemainus British Columbia. His parents were married in 1897 in Grafton North Dakota USA. His eldest brother George Joseph Wentz was his official executor and his other brothers were Leonard Albert and Achillé Ramon Wentz and his sister was Eliga Angeline Beall.
He was a mill hand and member of the Roman Catholic Church.
He enlisted on September 7 1939 in Nanaimo British Columbia and he went overseas to the UK on September 2 1941 and he went thereafter on June 6 1944 in the first assault wave to France during the D-Day landing.
Laurence was killed in action on Saturday July 8 age 25 in the C Coy near Cussy and he was temporarily buried there and he was reburied on February 7 1945 in Beny S/Mer.
And his medals were: 1939-45 Star; France Germany Star; Defence Medal; War Medal; CVSM & Clasp. 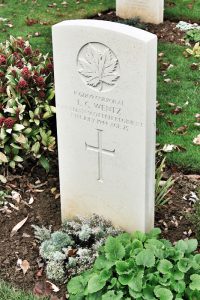