John was born on January 15, 1912 Darjeeling, India as the son of Major M’Donnell Parr (Irish and deceased in 1938) and Mary M’Donnell Parr (British and deceased in 1942). He was married on December 4 1937 with Calla Leslie Parr of Victoria British Columbia. And they had a daughter Moira McDonnell Parr. And Calla remarried after the war in England as Mrs. Proctor.
He had one brother in the Australian forces and one in the Canadian Navy and one sister living near Halifax Nova Scotia. Of one brother Alec M’Donnell is the name known and his mother in law was Mrs. Andios.
His profession was a service station manager and he was member of the Anglican Church.
He enlisted on February 21, 1940 in Victoria and he went overseas to the UK on May 23 1940 as reinforcement for the Princess Patricia Canadian Light Infantry and he returned to Canada on December 2 1942. He went back to the UK on October 16 1943 and he went thereafter to France on Tuesday June 6 1944 and he was in the first assault wave in the C coy during the D-day landing.
John was killed in action on this day age 32 and he was temporarily buried in Graye S/Mer and reburied on December 13 1944 in Beny s/Mer.
His medals were: 1939-45 Star; France Germany Star; Defence Medal; War Medal; CVSM & Clasp. 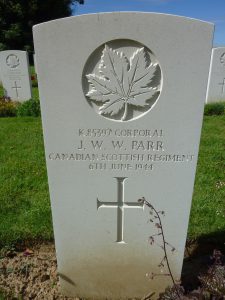