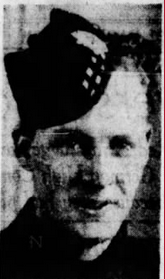 Donald was born on March 6 1921 in High River Alberta, the son of John Stephen and Margaret Mitchell (deceased in 1939) of Beaverdell British Columbia. His parents were married on November 19 1913 in High River. He was married on February 26 1944 in Levenshulme, Manchester England with Iris Mitchell nee Appleton of this town. His brothers were John Fowler and Allan Wylie Mitchell. His sisters were Mrs. Gladys Anne Hill, Mrs. Elsie May White, Jessie Sara and Shirley Joyce Mitchell. His uncle was C.R. Mitchell.
He was a labourer and member of the Church of England.
He enlisted on July 10 1940 in Vancouver and he went on June 12 1942 overseas to the UK  and he went on June 6 1944 to France  in the first assault wave during the D-day landing.
Donald was killed in action on Saturday July 8 age 23 in the C Coy near Cussy and he was temporarily buried there and he was reburied on February 7 1945 in Beny S/Mer.
On his headstone: TREASURED MEMORIES OF MY DARLING HUSBAND DONALD. LOVING WIFE IRIS 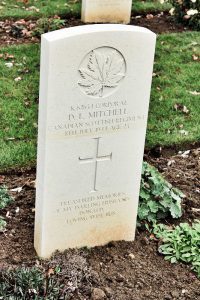